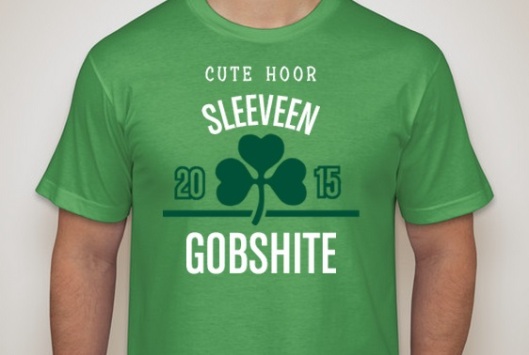 This post is especially for a reader from Boston, Massachusetts, called Zachary…

In crime fiction, especially tales stuck right bang in the middle of a major economic slump, your typical ordinary PI like Moss Reid can’t be too picky about his (or indeed her) clientele. These clients tend to choose him (or her), not vice versa. It’s the law of the market, supply and demand and all that.

Therefore some clients are bound to be downright dodgy sleeveens, gombeens and gobshites.

OK, take Ned Power. Ned is a somewhat shady politician character in my second ‘Moss Reid’ book, Black Marigolds. Not based on a particular real-life politician of course, I deny everything M’lud. But I do picture Ned as a right sleeveen.

Basically a sleeven is a sly, smooth-tongued trickster. He’s a shyster, someone prone to using sleeveen language – or “weasel words” in other words. When Ireland’s first Sleeveen Language Dictionary is compiled, I thoroughly intend a few choice quotes from Ned Power and his political colleagues / enemies to be at the heart of it.

That same Ned Power would probably also be referred to as a cute hoor (as in a clever / sharp / shrewd whore) or as a gombeen – a sort of middle-man or wheeler-dealer chasing a fast buck.

A short pause: these three colourful terms are to some extent a sad yet accurate reflection of our country’s highly f***ed-up brand of representative democracy since the island’s partition and the birth of a new State (or two new Statelets if you prefer) nearly a century ago.

Originally more an adjective than a noun, “gombeen” (from the Irish gaimbín, or “monetary interest”) first referred to money-lenders, then to the shopkeepers and merchants who ripped off the starving underclasses during the Irish Famine of 1845-52. The word is almost like a microcosm of the emerging political structures and practices of the past century and a half.

Since then the gombeen word has hopped and skipped its ugly way through Irish literature, from James Joyce’s Ulysses to Bram Stoker’s second novel The Snake’s Pass.

It also pops up in cult English writer Kyril Bonfiglioli’s short story The Gombeen Man, in his posthumous anthology The Mortdecai ABC – it’s the starting point of Johnny Depp’s new film that arrived in Irish cinemas this very afternoon, Mortdecai. And no, before you ask, I’ve not seen the movie yet.

The Irish poet and lyricist Seosamh Mac Cathmhaoil (aka Joseph Campbell – the man who wrote the English words to My Lagan Love) also had a splendid poem on the subject of what we’d nowadays call “them bloody loan sharks”. It too was called The Gombeen Man:

Behind a web of bottles, bales,
Tobacco, sugar, coffin nails,
The gombeen like a spider sits,
Surfeited; and, for all his wits,
As meagre as the tally-board,
On which his usuries are scored.

Over the years the “gombeen” term mutated to refer to all sorts of dishonest, underhand, petty, spidery and parochial or corrupt activities endemic to this emerald isle’s rotting stinking political system.

But how many gombeens are there in the Dáil?

By this stage some overseas readers might suspect that “gombeen”, “sleeveen” and “cute hoor” are coarse terms from everyday Hiberno-English. That they are reserved for mere “pub talk”, uncouth slang that would never ever manage to wheedle its dirty way into officialdom and parliamentary language within our well-Hoovered and Shake-‘n-Vacced corridors of power.

Wrong! Do a quick online search for the first official mention of “gombeen” in Irish parliamentary proceedings, and you’ll find it was by a Deputy Mary MacSwiney in the Dáil’s debate on the Treaty back in December 1921 – a full year before the Irish Free State was born.

“Sleeveen” (spelt that way, and don’t count the placename for the Sleeveen townland in County Kerry) is a more recent entry. Its first occurrence in the official record of Oireachtas debates is on 4 May 1978, when TD John Kelly described “a shabby piece of sleeveen Government” in the Bula Mines saga.

As for cute hoors, the first “cute hoor” I came across in the Oireachtas was from 3 July 1986. George Birmingham, then Minister for State at the Department of Foreign Affairs, was referring to an upcoming general election:

When the choice is presented to them (the electorate) between leadership and stroking, between courage and cowardice, vision and the philosophy of ‘the cute hoor’, I have no doubt as to whom they will choose.

His “stroking” reference is to another Irish peculiarity, stroke politics. “Pulling a stroke” is basically about pulling a fast one by bending or breaking the rules. It has more than a whiff of the blaggard about it, in a certain paradoxical love / hate way that I’ll go into in more detail another time.

Mind you, Deputy Birmingham was way off the mark about what the electorate would do: seven months later they put Charlie Haughey and his cute hoors back into office.

And as for the ‘gobshites’…

We can’t stop there, though. Look for a mention of the “gobshite” word in the Oireachtas.ie search engine of parliamentary debates and, believe it or not, it only gives one lone reference.

But just one single gobshite in the entire 20th- and 21st-century history of the Oireachtas?

Surely not – is the official record censored? Do the stenographers of Leinster House not know the gobshite G-word when they hear one? Is there some kind of software “block” in the search engine, yet the very same algorithmic fishing-net had a glitch this evening that allowed this one little gobshite to slip through unharmed?

The solitary gobshite reference is in a Senate speech by David Norris, from 31 March 2007. He was discussing defamation and (of all people) the Dalai Lama. It’s a touchy subject.

But Senator Norris the great orator was interrupted in mid-sentence by An Leas-Chathaoirleach (that’s the chair or Speaker of the House to you and me), who told him in no uncertain terms that – wait for it – “That is unparliamentary language.”

Yet the first “gobshite” in the Irish Times only appears as recently as 1973, since when (or is it “since which”?) the newspaper has had a grand total of 166 gobshites or more.